Rules of the Dojang... 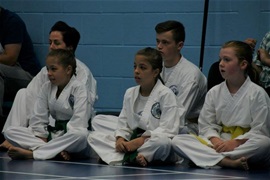 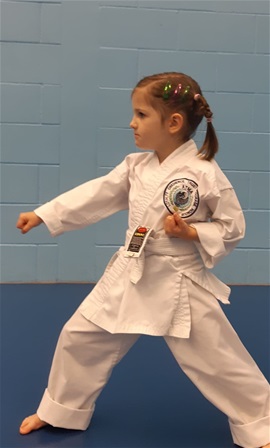 Controlled movement at all times

Full extension of the leg and hip.

All kicks must be above belt height.

NO sticking out thumbs

Hips with the technique

Fingers together, thumb braced in

Two arms must be used

Hips with the movement

Block within the lines of your body.

Hip width within the stance

Stance should be at least two of your ordinary paces in length.

Both knees should be bent

Toes at 90 degrees to direction of travel

All moves should be made with full focus and effort.

Look before you move. 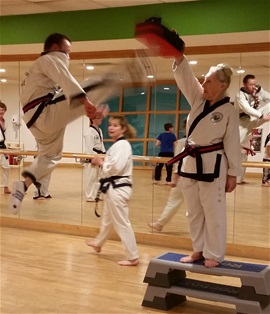 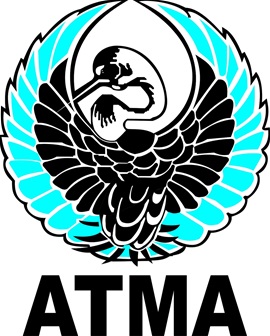 The Codes of the Hwa Rang Warriors...

The Hwa Rang Warriors of the Shilla Dynasty were a group of young men, government controlled, that devoted themselves to defending their country. They lived by 5 codes...

These codes were extended by modern Tang Soo Do in recognition of the changing times into the...

The Ten Articles of Faith...

The key concepts are essential attributes required for the study of martial arts.

The Meaning of our Badge... 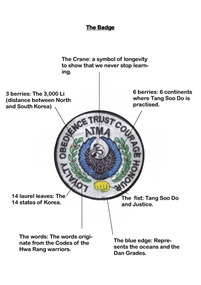 Below are the forms practiced within our syllabus. Other associations will practice forms that we don't and we will practice forms that they don't...and that's okay. The explanations of the forms will vary according to people's understanding of their background, but as with all history, it is open to embellishment or omission. It requires the reading and cross-reference of many texts on the matter to establish as close a history as possible. 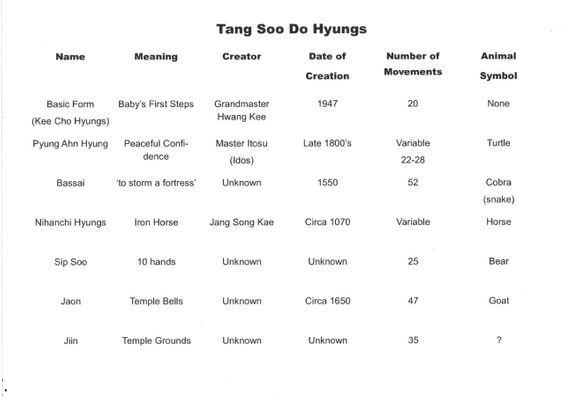 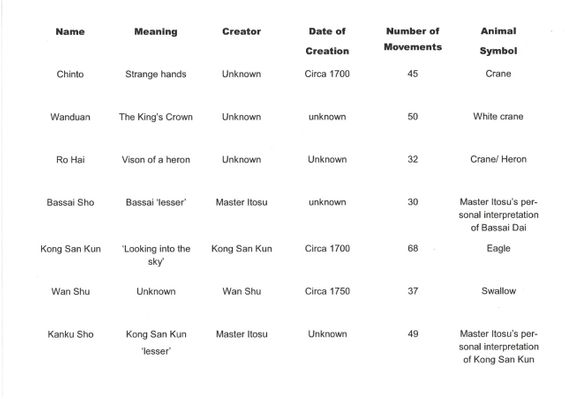 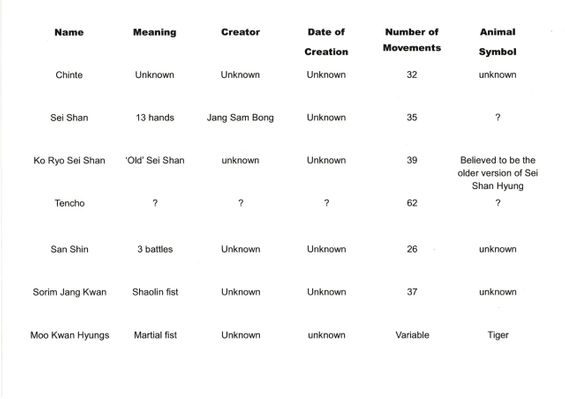 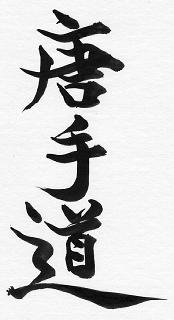 The most important factor to bear in mind when studying any area of ancient history is personal perspective. History is intended to be an unbiased account of past events, but what we must remember is that the ancient scribe will have had his/her own slant on the situation and, in the case of war, the summary will often be tainted depending on which side gives the summary. We must also consider that, over some 2,000 years of turmoil (most significantly, the Japanese occupation of Korea) that not all historical documents will have survived to pass on their story. However, certain facts can be agreed upon, and based on this information, you must draw your own conclusions.

The other factor to bear in mind is that although Tang Soo Do is deemed a Korean martial art, it has been subjected to much influence by both friendly neighbours and foreign invaders, in much the same way that traces of Roman culture still survive in England. Tang Soo Do derives influences from the Chinese arts as their friendly (or sometimes not-so neighbour to the north) and also holds some Japanese influence from the time of occupation.

Although some will deny this, many of the modern day Tang Soo Do Hyung are suspiciously similar to the kata of Shotokan karate, a traditional Japanese style.

In the early years of Korean martial arts development (first century BC), Korea was split into three kingdoms. The largest kingdoms, Koguryo, lay in the North by the Chinese border. The remaining two kingdom, Paekche and Shilla took equal share of the land below Koguryo in the South. At this time, martial art was still in the primitive stages of development.

As always, when three kingdoms with developing fighting capabilities were in such close proximity, battles were inevitable. The Shilla kingdom was home to the Hwa Rang warriors, known throughout the country as a formidable force and therefore, a threat. In recognition of this threat, Koguryo and Paekche formed and alliance with each other (and also with some parts of Japan).

Shilla recognised the threat and in an effort to defend their territory, turned to China for assistance. At that time, China was ruled by the Tang Dynasty and martial arts were flourishing. Shilla joined forces with the Tang Dynasty with the aspiration of overthrowing Paekche and Koguryo. However, as so often happens, the Chinese had their own agenda and, when the battle was won, refused to leave. The Shilla kingdom fought back, alongside Koguryo and Paekche, driving the Chinese out and eventually unifying Korea. However, influences of Tang martial arts remained behind in the form of Tae Kyon

The unified Shilla Dynasty was overthrown in 918AD by the Koryo Dynasty. The Koryo Dynasty was a much more militaristic society. The strength of their army had brought peace to the country and they longed for a friendly alliance with China (the Sung Dynasty at this point.). The art we know as Tang Soo Do existed as Soo Bahk Ki at this point and was practised by the Koryo army.

During this peaceful alliance with China, the sides continue to develop their martial arts together. This was only threatened during the 13th Century when Ghenghis Khan took control of China and attempted to take Korea by force - he lost!

The Yi Dynasty followed on from Koryo Dynasty and lasted from 1392 until 1910 when the Japanese occupation began. It was during this time that one of the oldest surviving martial arts textbooks, the Moo Yae Dobo Tong Ji was written. This book depicted 23 fighting systems, including weapons and the empty hand and foot techniques derived from the Soo Bahk Ki and Tang Soo Ki (the old Korean and Chinese hand fighting styles). At this time, Soo Bahk Ki became Soo Bahk Do and was accessible to common people as well as the military.

I must stress at this point that many practitioners claim that there is no Japanese influence, but given that it was the Japanese occupation that immediately preceeded the birth of modern Tang Soo Do, I find this highly unlikely.

In 1910, the Yi Dynasty were overthrown and the Japanese took control of Korea. During this time, all aspects of Korean culture were suppressed, including martial arts. Practitioners of Soo Bahk Do were forced to flee or go underground to continue their training, but one can safely assume that, although there were still the ‘hardcore purists’ training underground, the younger generation will have been fully subjected to the Japanese culture through school and society. Many even took Japanese names to fit in. When the Japanese rule came to an end in 1945, Korea basked in the glory of release from years of oppression and began to firmly establish their own culture once again.

However, the fact remains that at least one generation had been raised in an entirely Japanese culture - they would have known no different, therefore it is inevitable that some of the influence would remain.

It was at this point that Hwang Kee, having studied Soo Bahk Ki and Tae Kyon in his younger years, formed the modern day Tang Soo Do (originally Soo Bahk Do). It is important to mention that Hwang Kee’s other major influence was Chinese Kung Fu, which he learned on his travels to China. It is also acknowledged that Hwang Kee studied books on Okinawan karate. At the end of the Japanese occupation, many Kwans (schools of martial art) appeared in Korea. Hwang Kee was the founder of Tang Soo Do Moo Duk Kwan (House of Martial Virtue) school, but many other existed such as Song Moo Kwan, Ji Do Kwan, Kang Moo Kwan to name just a few. In 1965, an attempt was made to unify all the schools under the name of the Korean Tae Kwon Do Association and many of the schools were incorporated into this group, explaining why Tae Kwon Do has a much higher profile than Tang Soo Do today. Hwang Kee chose to remain independently as Tang Soo Do Moo Duk Kwan, hence the current style has survived.

Hello Karl, I would recommend Mondays at Ashlawn school...

Hi Charlie, We have 2 classes in Rugby. Monday's at 6pm Ashlawn school...

Hi looking for a class for 10yr old in rugby please